Last week Joe Wilson of SQA and I presented a short webinar on the Open Scotland initiative and the Scottish Open Education Declaration.  The webinar, which was hosted by Celeste McLaughlin of Jisc RSC Scotland, generated some interesting discussion and debate around open education in Scotland.  A recording of the webinar is available here, and our slides are available from slideshare here .

The Scottish Open Education Declaration was introduced in the context of other open education developments including the UNESCO / COL Paris OER Declaration, the Open Educational Resources in Europe project, and Welsh HEIs statement of intent to work to open education principals. The Open Scotland initiative welcomes participation from individuals and institutions and we encourage all those with and interest in open education to comment on and endorse the Scottish Open Education Declaration.  Joe encouraged participants to get involved as individuals and also to take the Declaration back to their academic boards to raise awareness of the initiative and to get their institutions to sign up.  At this stage, the main aim of the Declaration is to raise awareness of the potential benefits of open education policy and practice, a valuable next step would be to start gathering exemplars that illustrate each statement of the declaration in action.

Joe and I both highlighted examples of open education practice in Scotland and further afield and participants also suggested other examples of communities sharing educational resources including the Computing at School Scotland initiative which aims to promote the teaching of computer science at school, and the fabulously named Magic Physics Pixies and their Scottish Physics Teaching Resources network.  This discussion prompted Tavis Reddick, of Fife College, to ask:

“Are there any illustrative exemplars of, say, OER, which Open Scotland would recommend to show how sharing and remix could work in practice?”

Although Open Scotland hasn’t got as far as recommending specific resources, the UKOER Programmes produced a wide range of resources including the OER Infokit,  and the ALT Open Education SIG recently gathered a series of case studies for Open Education Week.  The University of Leeds have also produced guidelines on developing and using OER for staff and students which have been adopted and repurposed by Glasgow Caledonian University: Library Guidance on open educational resources.

There is also considerable interest in the potential of Open Badges across the sector. Joe flagged up SQA’s commitment to Open Badges  and Celeste highlighted the work of the Open Badges in Scottish Education Group and Borders College’s use of Open Badges to replace paper based certification for continuing professional development activities.

There was some discussion of the Re:Source repository of open education resources for the Scottish college sector, with questions being asked about how extensively it is currently being used and whether a sustainable funding model could be developed. One suggestion was that, in the longer term, recurrent funding for Re:source could potentially come from the things it might replace, such as teaching materials acquisition budgets. One participant noted that their college did not yet have a policy that allowed them to publish OERs to Re:Source, but added that they hoped their board would take an interest soon.

One very valid question raised towards the end of the webinar was “how will we know if we are getting any better at this?” There are currently no benchmarking guidelines or KPIs for open education in Scotland but it would certainly be very interesting to undertake a landscape study of current open education practice across all sectors of Scottish education.  This would act as a baseline against which we could measure progress, but a survey of this nature would require dedicated funding and resources.    We’re already aware of lots of interesting examples of open education practice in Scotland but I’m sure that are many, many more out there, so if you know of any, or if you’re involved in any open education initiatives at your own institution, please do get in touch!

Earlier this week I was invited by Jisc RSC Scotland to attend their Open Education Joint Forum which took place at the Informatics Forum at the University of Edinburgh.  It was a very well attended event that featured a packed programme of thought provoking and  engaging presentations that highlighted a range of really inspiring open education developments.   I’ve put together a storify of the event’s lively twitter back channel here and links to all the presentations are available from Jisc RSC Scotland here.

I kicked of the event with a short overview of the Open Scotland before passing over to Joe who challenged the audience to share their educational resources, before talking about about the benefits of openness and calling for changing mindsets around Open Education.  Joe also reminded us that there is a real strength in Scottish education, we have dedicated and talented teaching staff and by opening up education they can shine for learning.

Martin Hawksey, my former Cetis colleague, now with ALT, gave an inspiring presentation that placed MOOCs in the historical context of technology innovation and asked if we are now in danger of promoting a dogmatic approach to programming and technology innovation. Martin revisited Doug Englebart’s “Mother of All Demos” which, among many other innovations, demonstrated screen sharing and videoconferencing as far back as 1968.  In education we have a tendency to get stuck in particular ways of doing things, both students and teachers have specific expectations and can be very resistant to change.

Martin highlighted some of the tools, services, platforms and applications that can be employed to deliver MOOCs.  He also reminded us that every letter of MOOC is negotiable and suggested that the issue of MOOC completion rates is irrelevant.  Open or closed is not a binary thing, but there are huge benefits to moving towards more openness.  Martin concluded by telling is all that “openness is about feeling warm inside” and that we should all “ride the waves of innovation to a more open, more relevant style of education’.  Martin has written a an excellent blog post about his presentation which you can read here: Taking on the dogmatic approach to education with a bit of ‘reclaim open digital connectedness’.

Re:Source is an OER repository for Scotland’s colleges. The open platform is here and could be used by many across the Scottish education sector but policy drivers needed.  Jisc RSc Scotland is collaborating with Scotland’s Colleges to work ona  way forward. Librarians also have a crucial role to play in developing open repositories within Scotland’s colleges.  Jackie Graham went on to demonstrate the Re:Source repository before handing over to Sarah Currier who spoke about the Jorum repository which powers Re:Source. 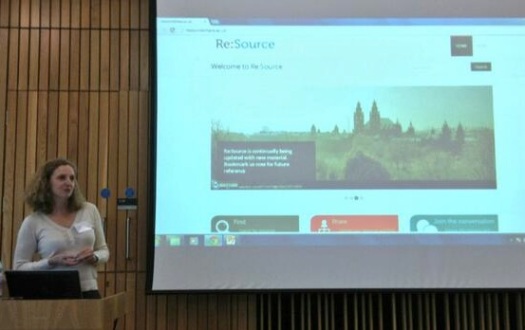 Julie Usher began by highlighting the potential of OERs but suggested that they can be hard to find; how do you fin and evaluate OERs, link them to curricula, including assessments.  To address this problem Blackboard have developed the xpLor content repository. xpLor supports OER discover and allows content to be pulled directly into Blackboard courses.  Creative Commons is baked into xpLor repository so content can be exported with  CC licenses.

Introduction to Open Badges and OBSEG

Open badges are a form of digital accreditation that can be displayed online.  Badges are like coats of arms, they are images that contain information and have meaning beyond the visual.  Open Badges incentivise informal, formal and work based education and break learning into manageable chunks. The Open Badges in Scottish Education Group (OBSEG), which is supported by Jisc RSC Scotland, has set up three sub-groups focusing on Learner Progress, Technology and Design and Staff Development.

In Scotland, interest has been growing around the opportunities afforded by the open, standards-based, accreditation framework, Open Badges, to augment traditional accreditation routes. At the Jisc RSC Scotland Open Badges Design Day, held in April 2013, staff from further and higher education institutions worked with the Mozilla Badges and Skills Lead, Doug Belshaw and the CEO of DigitalMe (DML Competition ‘Badges for Lifelong Learning’ winners and Badge the UK leads) Tim Riches, to consider possible badge-based pathways to learning and to explore the Mozilla Open Badges Infrastructure (OBI). At this event, there was consensus that it would be useful to bring together interested parties to identify areas where Open Badges could add value to education in Scotland and to engage in joint developments.

In response to this, the Jisc RSC Scotland has convened the Open Badges in Scottish Education Group (OBSEG) which now includes members from schools, further and higher education institutions, educational agencies including the Scottish Qualifications Authority (SQA) and Education Scotland, professional bodies, employer bodies, national and local government, Open Badge projects such as DigitalMe’s Badge the UK and Mozilla. The group performs an overview and mapping function of Open Badge developments in Scottish education, oversees a number of sub-groups developing badge constellations and pathways, and provides a forum for discussion and strategic agreement around Open Badge developments.

I was delighted when active members of the OBSEG, the SQA, issued a press release on the opportunities they are investigating with Open Badges: http://www.sqa.org.uk/sqa/67688.html. As far as I’m aware, this commitment from a national awarding and qualifications authority is a world first. The SQA has gained feedback from the wider sector on Scotland’s aspirations in relation to Open Badges via the OBSEG and Jisc is looking forward to continuing to support the Open Badge developments enabled by this commitment and by others, in the Scottish education community.

You can find out more about the OBSEG, the organisations, institutions and bodies represented and the work of the group at: http://bit.ly/obseg