Warning: Constant WP_DEBUG already defined in /home/openscot/public_html/wp-config.php on line 102
 The Place of Gaelic in Modern Scotland – 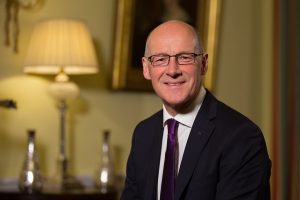 Last week in Stornoway, as part of the Royal National Mòd, Mr John Swinney, Deputy First Minister and Cabinet Secretary for Education and Skills, presented the Angus Macleod Lecture on The Place of Gaelic in Modern Scotland. Mr Swinney assumed ministerial responsibility for the Gaelic language after the last election.

In a thought provoking speech Mr Swinney reiterated the Scottish Government’s commitment to securing the future of the Gaelic language in Scotland and outlined plans for education, broadcasting, digital and economic development to support the language.

The First Minister clearly stated that hostility towards Gaelic has no place in Scotland, adding that the reason for the Government’s commitment to the language is quite simple. “Gaelic belongs in Scotland.”

Although Mr Swinney did not speak specifically about open education, he did refer to the importance of Gaelic education provision:

“Earlier this year, the Scottish Parliament passed an Education Act which included important Gaelic provisions. We will use this to strengthen Gaelic provision in schools.

This Act placed a duty on Bòrd na Gàidhlig to prepare Guidance on Gaelic education. This Guidance, for the first time, describes what parents can expect local authorities to deliver when they choose Gaelic education for their children. The consultation on this Guidance closes at the end of this month.

In recent years, we have seen a welcome increase in the number of parents choosing to place their children in to Gaelic education. Since 2008, we have witnessed a 32% increase of young people in Gaelic medium education and it is our duty in the Scottish Government, working with local authorities, to ensure this demand can be met.

Today I would like to announce £700k of funding for Glasgow City Council for its two Gaelic schools at Glendale and Berkeley Street. This funding will further improve the learning environment for young people studying core subjects such as physical education, STEM and ICT, ensuring Gaelic learning provides a wide experience across the curriculum.”

In response to a question from Open Scotland regarding the importance of ICT to support Gaelic education, the Deputy First Minister reiterated the Government’s commitment to providing 100% network connectivity throughout Scotland. He went on to highlight the importance of education technology to broaden the coverage of education provision, ensuring that Gaelic education can reach greater numbers of learners than ever before. In addition he also emphasised the new opportunities that information and communication technology affords young people in the Highlands and Islands, enabling them to expand their education and skills, and seek new careers without having to leave the Gàidhealtachd.

A Storify of live tweets from the Deputy First Minister’s lecture is available here: The Place of Gaelic in Modern Scotland