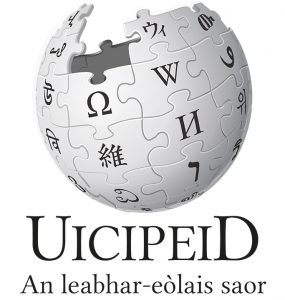 Earlier this month the National Library of Scotland and Wikimedia UK announced they are recruiting a Gaelic Wikimedian funded by Bòrd na Gàidhlig to help promote the Scottish Gaelic Wikipedia, Uicipeid.

The Gaelic Wikipedian will be responsible for designing and delivering a range of activities that will encourage young Gaels to improve their language skills through editing Uicipedia. They will deliver events and workshops and work with Gaelic organisations and communities to promote knowledge about Uicipedia and increase its size and usage. They will also support the development of open knowledge and open licenses and prepare progress reports to assess the impact of their work on the development of Uicipedia.

The Wikipedian will work with the National Library, Wikimedia UK and Gaelic agencies and organisations to identify groups to engage with including young people between the ages of 16 and 25, community groups and those active in areas such as music, local history, literature etc.

The part time role will be funded for 12 months and the National Library are flexible as to where the Wikipedian will be based as they will need to deliver training throughout the Western Isles, Highlands and central Scotland.

“As the national chapter for the global Wikimedia movement we believe that open access to knowledge is a fundamental right, and a driver for social and economic development. We are delighted to be working with the National Library of Scotland on this important project, which will see the Gaelic Wikipedia becoming an increasingly important source of information created by and for Gaelic speakers, with better online coverage of Scottish Gaelic history, culture and heritage.”

Further information about the Wikimedia role and an application form is available the National Library. Applications close on the 4th November 2016.